These blog pages are usually reserved for discussion of all things wine (and the next post will be all about “orange wine”). But today we’re going to talk about terroir, and more specifically, food and drink created by Indigenous chefs and food lovers. The event in Toronto is called Terroir, held at the stunning Art Gallery of Ontario and home to Canadian legends like Tom Thomson, The Group of Seven, Emily Carr and Cornelius Krieghoff. 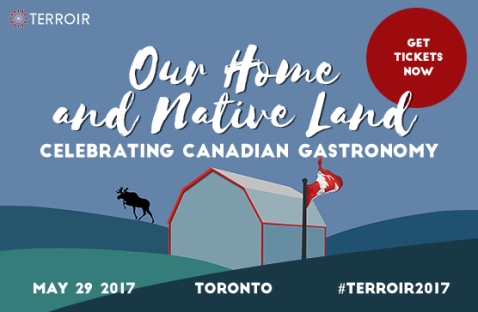 Canadian Gastronomy – Our Home and Native Land is all about celebrating Canada’s/Ontario’s/Toronto’s tastemakers and culinary culture. Under the microscope … Indigenous cuisine, and by extension, an understanding of how First Nations traditions inform Canadian gastronomy – our farming, foraging, fishing and flavours.

The promise of wine tasting and talk may have drawn me here, but what’s really shaken and stirred my soul is Terroir’s opening session on Indigenous food culture here in Canada. Two weeks after this discussion, I know I’m a better person for it.

A series of presentations by First Nation’s historians, chefs and food lovers on the connection between food, family and community has truly moved me, and the 400 + in the audience today.

These aren’t actually presentations. There’s no power point going on here. These are stories – raw, inspiring, spirited, first person stories in the First Nations tradition of oral story telling. All around me, folks are reaching for Kleenex. It’s clear Terroir is a proxy for rich, indigenous food culture but also for the divisive, colonization practices that have framed the history and treatment of First Nations peoples in Canada.

Those of us in the audience who are non-Aboriginal, are wallowing in collective guilt as we listen to the painful truth and reconciliation process indigenous presenters share – their lives, and food traditions disrupted when generations of children were taken from their families.

“Cuisine is passed down through our language and culture,” says Philip Cote, an Aboriginal artist, traditional wisdom keeper and historian in Toronto. “Residential schools in Canada – strict policies of assimilation and the internment of First Nation children across the country for close to 100 years – disrupted that cycle and separated Aboriginal people from their land.”

First Nations peoples pass customs and traditional teachings around hunting, fishing, farming to each subsequent generation but Cote says the rippling effect of residential schools and tearing apart families meant alienation from parents and grandparents and the loss of traditional foods and diet. “Today we need to teach all our children that food comes from mother earth and not a package,” says Cote. “I smudge the bottom of my feet because that’s what connects me to my mother.”

A noted Sun Dancer and sacred Pipe Carrier, Cote reminds us Indigenous People inhabited Canada for millennia before settler populations moved in. “Food is a gift from the creator, not a commodity. We do not own the land. We borrow it from our children.”

But the Indian Act, taking away self-governance, moving Aboriginal people to reserves, expropriating their lands for corporate interests in mining, railways, forestry, not allowing their language to be spoken in public schools, stripping children of their aboriginal names, sinking and burning fishing boats so fishers couldn’t feed their children …. just a small part of the cultural damage inflicted on First Nations peoples.

“When First Nations people handed Toronto land over to new settlers on August 1, 1805, they shared a covenant of compassionate stewardship of the land,” Cote tells the audience. The wisdom of the seven grandfathers – courage, respect, wisdom, honesty, truth, humility and love guided their actions. “As time marched on, First Nations people could see their world-view was very different from the western world-view and experience on “Turtle Island,” says Cote. “The western world-view is everything is a commodity to be bought and sold.

We have over 150 boil-water advisories in our northern communities and Grassy Narrows has one of the highest cancer rates in the modern world. When you destroy our habitats you destroy our cupboards and our food.”

Philip Cote’s truth-telling sheds light on a deeply disturbing narrative but also illustrates the importance of food traditions in connecting Indigenous people to the land. The ceremonial dancing and drumming that opens today’s conference and the sweetgrass smudging ritual Cote shares with the audience is a generous peace offering and an invitation to be part of the positive change that First Nations families in Canada are finally starting to realize.

Chef Shane Chartrand works at the popular Sage restaurant in Edmonton. He was born into the Enoch Cree First Nation but raised by a Metis family. At his restaurant, he connects the reverence he holds for his Cree and Metis heritage and family cooking rituals to the dishes he prepares for his guests. “I grew up understanding the value of outdoors and the land,” he says. “Hunting, fishing, head-to-tail cooking – is just what we do,” he says. “It’s respectful of the animal, it’s not wasteful and it connects us to the land.”

Chartrand also teaches cooking classes to Aboriginal youth. He wants the appreciation for food systems that’s at the heart of Indigenous cooking to be passed along to future generations. “The ‘three sisters’ is a way of life for Indigenous People in Canada,” says Chartrand. “We plant corn, beans and squash together to attract different bugs and foster a healthy eco-system. Squash provides ground cover, beans offers nitrogen for corn. This symbiosis and respect for the terroir is at the root of First Nations culture.” Today, over-fishing in Lake Erie is causing algae blooms – it sucks the oxygen out of the water and kills the fish. Where’s the symbiosis, he asks.

In what might be the tweet of the day Chartrand suggests for Indigenous people, there is no ceremony without a feast, and no feast without ceremony. “Indigenous cooking means Indigenous to the land – you harvested, prepared, cooked and consumed it. My life goal is to understand not only my culture but the culture of others and ensure a healthy respect for food, land and terroir.”

First Nations activist, John Croutch would like Canadians to better understand Aboriginal Cuisine. He’s challenging the dearth of Indigenous restaurants in Canada. “There are significant barriers preventing Indigenous food culture from being shared,” he says. “The cost of traditional foods like venison is prohibitive. If you want an Indigenous restaurant, you need to have a high end restaurant.”

A member of Wikwemikong First Nation on Manitoulin Island in Ontario, Croutch believes the marginalization of Indigenous cuisine, began as settlers arrived on North American shores. “Our food systems have been appropriated…. and then eventually they slapped regulations and licences and laws on our food.” Croutch acknowledges he grew up eating mostly European-style food. “The system has been set up to favour European foods over ours, it’s a crime because our foods are now so expensive.”

I’m so thankful I was in the audience to witness the delicious optimism and spirit of Sarain Carson-Fox who provided great food for thought on the relationship between Indigenous women and food. A dancer, actor and activist from the Batchewana First Nation of Ojibway, Carson-Fox is the first generation in her family to be raised traditionally at home and not be sent away to residential schools.

Her relationship with food traces to berries and her moon cycle, which in Aboriginal cultures, is less of a curse and more of a sacred time. “The first time I got my moon cycle I sat with my grandmother. You don’t clean or cook. For a girl it’s a time when a woman is in her most powerful place.” Saison said traditionally its women’s responsibilities to be the caretakers of life, but during this time men participate and there’s a sense of renewal when the community comes to support and help its young women. “It taught me about sacrifice and balance and how we harvest and bring foods to our community. During this time I didn’t eat or drink for 8 days. I couldn’t eat berries, the Marten Clan doesn’t eat marten, the Deer Clan doesn’t eat deer. This sacrifice makes us stronger.”

The feisty Carson-Fox says the strength and courage imparted to her as an Aboriginal young woman, and the sacrifices required in each clan to bring food balance to communities, explains much if the activism she’s seeing around current issues like water. “Water is the most central life force, and it’s one of the ways Indigenous Peoples have historically been controlled,” she said. The loss of the historic whitefish fishery in her Great Lakes Ontario reserve, due to hydroelectric dam construction and industrial pollution devastated her community. “Today’s water systems are at risk and it’s young women who are standing up for their communities as water walkers and leading the resistance in Indigenous communities. It’s our future generations that hold all the answers,” she suggests.

Food is a critical ingredient in a country’s identity and as we celebrate 150 years of nationhood and gastronomy, it’s a good time to think critically about the Indigenous narrative that feeds Canada’s food traditions. Asked to describe the food that represents this diverse and multi-cultural country, I suspect most Canadians would default to the inherited matrix of recipes, foods and flavours their ancestors brought with them – pizza, perogies, and pad thai. In a pinch, we might go with tourtiere, maple syrup, smoked salmon – although the more likely scenario would be – wait for it – Tim Hortons.

“We can, we must cook a better world.”

Thankfully, Canada has food laureate, culinary activist and food documentarian, Anita Stewart, to help put Canada’s culinary heritage into context. Her exhaustive knowledge of Canadian cuisine is as varied as the people who inhabit our country. Stewart has authored 14 books on Canadian food and wine and her recipes reflect Canada’s diverse gastronomic voice.

Many of her books document stories of Canada’s regionally diverse Indigenous traditions and feature ingredients central to Aboriginal culture; the wild geese and roasted beaver cuisine of the Northern Quebec Cree, the prairie wild rice and bison roasts of the Metis, the venison of the Great Lake’s Anishinaabe, the caribou and seal stews of northern Inuit, the fiddlehead, moose and cod catch of the east shore Mi’kmaq and the salmon and steelhead from British Columbia’s Haida and Salishan First Nations .

According to Stewart, “our reality today, is that most of us use very few truly Indigenous foods.” But, she argues Canada’s new world vision is part of a dramatic culinary evolution and revolution. “Today’s young chefs have become gurus….stars, and they’re helping re-write the Canadian menu. We only need to look at our Indigenous history and within our borders for food innovation,” she says. Today’s chefs are choosing fresh, regional and seasonal ingredients celebrating locally grown foods, organic flora and fauna, and the native plant foods that form the web of life – the same carpet which sustained First Nations for centuries.

Anita Stewart says “every culture is contaminated by other cultures – in Canada’s case there were originally 175 First Nations plant foods – today, maybe 10.” But she also argues Canadian food culture is more of a mosaic than a melting pot, a melding of international culinary influences that has made Canada the richer for it. Fiercely proud, Stewart says Canada has much to be proud of in the gastronomical world: Guelph University – Canada’s first agricultural college, OAC 21 – a storied, heritage barley and foundation of the malting industry; Marquis wheat – the international milling and baking standard for almost a century, the Slow Food movement started by the Women’s Institution in 1987, the Yukon gold potato….and on and on.

Food in its wildest form is the story of Canada – our terroir shaped by its oceans, lakes, rich bountiful edible lands and most essentially by Canada’s First people. As Anita Stewart says, “we can and we must cook a better world” for all who settle in our home and native land.

Food as a Weapon in the Residential School System